These seven words have come to represent the worst in writing. Contests to see who can match or even surpass this level of literary failing are held. As an author there is no way you want to create a dark and stormy night sentence, paragraph, chapter, or even worse, book. In recent years some have come to the defence of novelist Edward Bulwer-Lytton. This opening line was well within the prescribed style of florid, melodramatic fiction and the opening paragraph may not have caused people to place their fingers down their throats to induce vomiting as often as some would have you believe. Still, there is a taboo when it comes to describing any night as dark and stormy.

What if it is a dark and stormy night?

I am not going to debate the positives or negatives of Edward Bulwer-Lytton’s words in his infamous novel. I just want to know what you say or write when it really is a dark and stormy night. My fiction writing has been limited to plays and the rest of my writing is nonfiction narrowing the chance of a dark and stormy night moment in my writing. Because of this, I have not had to spend time agonizing over whether my opening sentence and paragraph will attract the wrong type of attention from literary critics and end up being deemed unacceptable “purple prose.” As a Pastor, a Christ follower and Christian author/blogger it isn’t the literary critics that cause me concern, it is those who disagree, demanding that I change what I say or write because it is not what they deem acceptable.

Communicating the truth of the Bible is the dark and stormy night of all who believe.

Just as the literary critics tell us not to produce “purple prose” because it is not what they deem acceptable, the world demands that we do not produce a defined moral system or state that our God is the true God because it is not what they deem acceptable. We look for someone to defend us, someone that people will listen to, someone that will stand up and say that what we believe is acceptable. Then a glimmer of hope; a public official, professional athlete, TV or movie star claims to be a Christian. Star struck, many Christ followers are quick to share their hero’s latest statement about faith with all their Facebook friends as if this is finally proof that Christianity is an acceptable practice. Guided by their desire for continued career success, many prominent people have embraced Christianity publicly but watered it down so that it lacks morality and is void of any public references that could offend. For them there will be no dark and stormy night moments, no statements that the world has deemed unacceptable because no one wants to offend anyone even if it is with the truth. 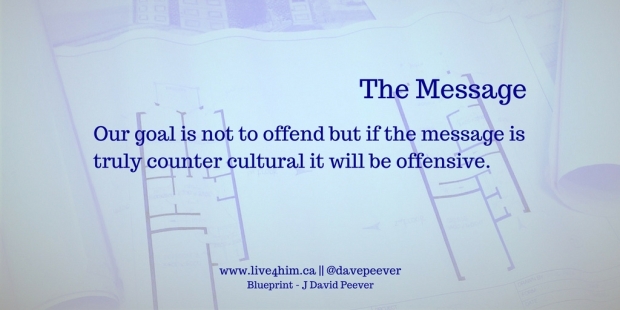 It is easy to search for acceptance in the wrong places. Christianity will never be the mainstream religion that we often assume it should be. Followers of Christ have found the truth, accepted it as the only way and embraced it as life, but not everyone sees it the same. We should not be shocked that what we believe is not acceptable. Jesus said, “If the world hates you, keep in mind that it hated me first. If you belonged to the world, it would love you as its own. As it is, you do not belong to the world, but I have chosen you out of the world. That is why the world hates you” John 15:18-19 (NIV).

I would rather be ridiculed for the truth than accepted because I say what people want to hear.

It is not easy to live life as unacceptable to the world, but as followers of Christ we live not for the world’s acceptance but instead we live life knowing we are accepted by God because we have placed our faith in Him.

For I am not ashamed of the gospel, because it is the power of God that brings salvation to everyone who believes: first to the Jew, then to the Gentile. For in the gospel the righteousness of God is revealed—a righteousness that is by faith from first to last, just as it is written: “The righteous will live by faith.” Romans 1:16-17 (NIV)